Info
Slayer of Souls captivates with solid grinding, stylish graphics and long motivation in a beautiful mix. Revenge your enemies and take back your power and your land. Still German only.

PVP at its best
Player can fight single or in guilds
Extensive range of items and skills
3,000 different equipment items can be combined with skills
Armies and Dungeons
Numerous dungeons are to be conquered with the army of up to 50 units and six different units.
pet
The beast can be trained individually and is ranked according to its own ranking list. 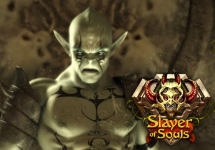 In the dark story you take on the role of a dark ruler who subjugated the world of Sindea with hard hand and cruelty. Finally he was defeated in a battle of epic proportions by the good powers. Mistakenly, he was assumed to have fallen in battle. But he managed to escape at the last moment.

This is the moment when the player gets his turn. In order to regain control of Sindea and reignite the overpowering enemy, area by area must now be re-conquered.

Over 3,000 different items of equipment, skill training, numerous crisp quests, and challenging battles against other players in the ladder-based arena leave the (anti-)hero in Slayer of Souls with little time to breathe.

In addition, an army of up to 50 men can be commanded. The different units have individual abilities, so that the composition of the army has a tactical component. The beast still remains, these have different characteristics, which are useful to the players in the single player mode and are individually trained. In the guild hall, players also have the opportunity to join forces with other players to forge joint revenge plans.